List of Australian Military Quotes | The Principles of War Podcast

Here is a short list of some of the best quotes Australian military quotes from soldiers, sailors and airmen.  I am crowdsourcing the list, so please add your favourite in the comments.

“We’re not here to take it, we’re here to give it.”   LT GEN Leslie Morshead.  On reading a British Propaganda article about the defence of Tobruk entitled “Tobrukl can take it!”

“I determined we should make no man’s land our land,” LT GEN Leslie Morshead.  Describing his aggressive and ceaseless patrolling program outside of Tobruk.  Morshead’s had a reputation as a strict and demanding officer who insisted on discipline and hard work – his nickname was “Ming the merciless”, or just “Ming” after the Flash Gordon villain.  He could be blunt with senior officers.  On arriving at Tobruk he inspected his perimeter defences closely and told his principal staff officers, “There will be no Dunkirk here,” and “There is to be no surrender and no retreat.”.  He instructed troops to not engage German tanks, but to wait till they passed and they destroy the infantry following on.  The artillery was then able to deal with the tanks.

Remember – it is not the man with the gun that gets shot; it’s the rabbit that is running away’ LT GEN Blamey addressing 21st BDE at Koitaki Plantation, during his infamous ‘Rabbits’ speech.  LT COL Carlyon, OBE, who served as Blamey’s ADC wrote, “I was there when those fine soldiers formed up, not far from what had been the start-line for their thrust against the enemy. New Guinea’s stormy temperatures being what they are, it may seem absurd for me to say that I was in a cold sweat. Standing beside the small platform from which Blamey was to address the troops, I realised that he was in a most aggressive mood. He was soon expressing this in harsh words. He told the men that they had been defeated, that he had been defeated, and Australia had been defeated. He said this was simply not good enough. Every soldier here had to remember that he was worth three Japanese. In future, he expected no further retirement but advance at all costs.  It amazed me that Blamey should deal so insensitively with the men of such a well-proved brigade”

‘Here you bloody well are and here you bloody well stay. And if any bloody German gets between your post and the next, turn your bloody Bren around and shoot him up the arse’ BRIG George Vasey.  Instructions to the troops of 19th BDE at the Battle of Thermopylae, 23rd April, 1941.

CAPT Frank Bethune, OC No 1 Section, 3rd Machine Gun Company, Passchendaele.  Another of his quotes is, “With our dear ones behind, and God above, and our friends on each side, and only the enemy in front— what more do we wish than that?

“Morituri vos salutamus”, those who are about to die, salute you. Group Captain John Lerew.  On being directed to keep the airfield at Rabaul open, when he had just 2 Wirraways and 1 Hudson bomber.

The story of Capt Bethune’s orders.

Frank Bethune was a priest, ordained in 1908 and served as the Parish priest at the St John the Baptist Anglican Church in Hobart.  He became a fighting padre, enlisting in 1915 as a private.  He was commissioned as a 2LT in the 12th Battalion, 3rd BDE.  He was awarded the Military Cross for bravery in 1917.  In March 1918, Bethune, commanding No 1 section, 3rd Machine Gun Company, was ordered to occupy a defensive position at Buff Bank near Messines in France. The Section survived and 18 day tenure of the position.  The orders became famous, being published in The Times and being described as “inspiring and famous”.  They were circulated around the British and French armies and in British Army Orders until 1940.  After the fall of Dunkirk, they were printed on posters under the caption ‘The spirit which won the last war’ and shown throughout England.

One of the most famous set of orders every given in the Australian Army.

The order was printed on posters in WW2.

“Chin Up Girls, I’m proud of you. I love you all.” Matron Irene Drummond of the AANS (Australian Army Nursing Service) just before she and 21 other nurses were machine-gunned in the Bangka Island Massacre.

“… never quite realised how dense the fog of war could be!”   MAJ GEN Cyril Clowes, 30 Aug, 1942, to LT GEN Syd Rowell after winning the Battle of Milne Bay in New Guinea.  He and his brother were in the first class of cadets to enter RMC-D.

I trained the company the way I wanted to train them, based on my experiences in Malaya, where I was a Platoon Commander and where I shot my first enemy and I wanted to see my soldiers go into action with the best possible background, weapon training, teamwork and esprit de corps that we could possibly have and in retrospect, I believe that we achieved that.  LT COL Harry Smith, the OC of Delta Coy at Long Tan 18 Aug 1966.

Quotes about the Australian Army, Navy and Air Force

“Even if I wished to surrender, and I don’t, I am commanding Australian who would cut my throat if I accepted your terms.”  COL Charles Hore, Commander at the Elands River Post in response to a request from Boer GEN Jacobs Koos de la Rey to surrender.  The 500 Australians and Rhodesians were outnumbered 3 to 1.  Lord Kitchener went on to say, “Only colonials could have held out and survived in such impossible conditions”.

“The Australian troops are fighting magnificently and their training is far superior to ours.”   Field Marshal Erwin Rommel.  Writing to his wife, Lucia, about the stubborn defence he was encountering at Tobruk.

“My God, I wish we had 9th Australian Division with us this morning”.  MAJ GEN Freddie de Guingand, CoS Allied Land-force HQ Europe, 1944 about the D-Day landings.

“the Australian divisions and the New Zealanders had become what they were to remain for the rest of the war – the spearhead of the British Army” John Terraine, leading British historian of WW1.

“Australian troops had, at Milne Bay, inflicted on the Japanese their first undoubted defeat on land. Some of us may forget that, of all the allies, it was the Australians who first broke the invincibility of the Japanese army.” Field Marshal Sir William Slim, regarding the repulse of the Japanese landing at Milne Bay.

“For dash and gallantry the bloodthirsty Scots, Australians and Canadians led the way, with the impetuous Irish close behind. The Australian to my mind were the most aggressive and managed to keep their form in spite of their questionable discipline. Out of the line, they were undoubtedly difficult to handle, but once in it, they loved a fight. They were a curious mixture of toughness and sentimentality.” LT GEN Sir Adrian Carton de Wiart, VC.  This is no faint praise, Sir Adrian Carton de Wiart was awarded the VC as the OC of the 8th Battalion, Gloucestershire Regiment, during the Battle of the Somme.  With only one arm, he was seen pulling grenade pins with his teeth in order to help stem the German advances.  When a surgeon refused to amputee badly damaged fingers, he tore them off himself.  He served in the Boer War in the British Army, despite being underage, didn’t have his fathers consent and not even a British subject.  He was wounded so frequently in WW1 that the convalescent home in Park Lane kept his own pyjamas ready for his next visit. 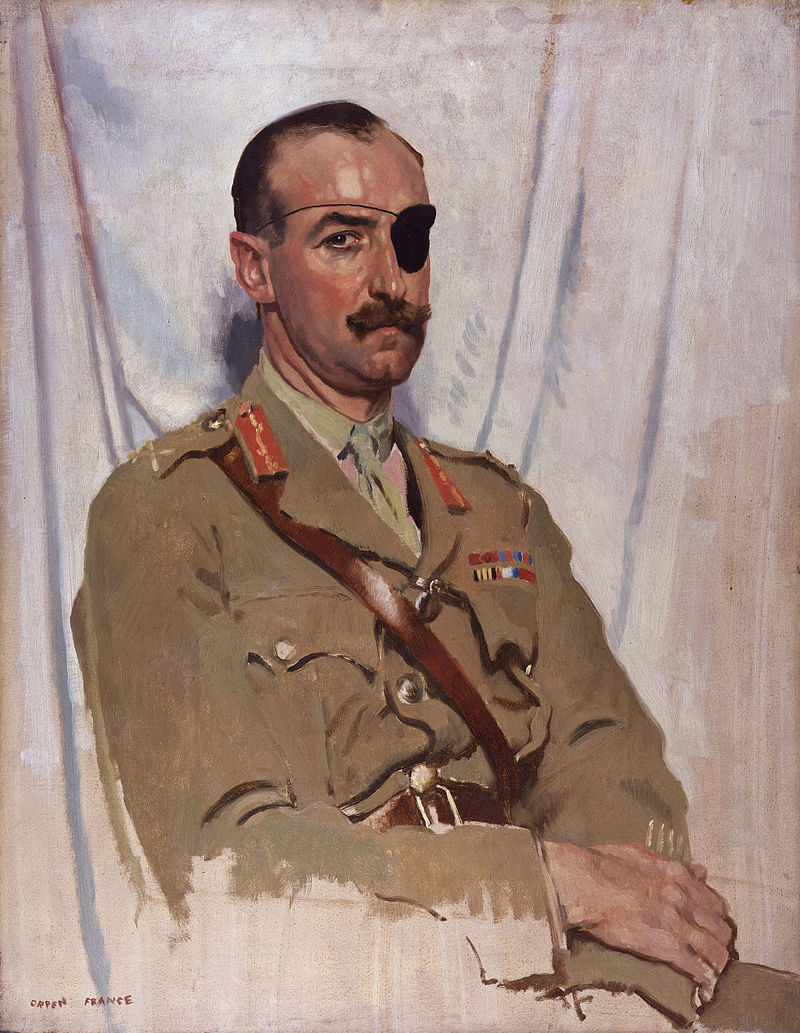